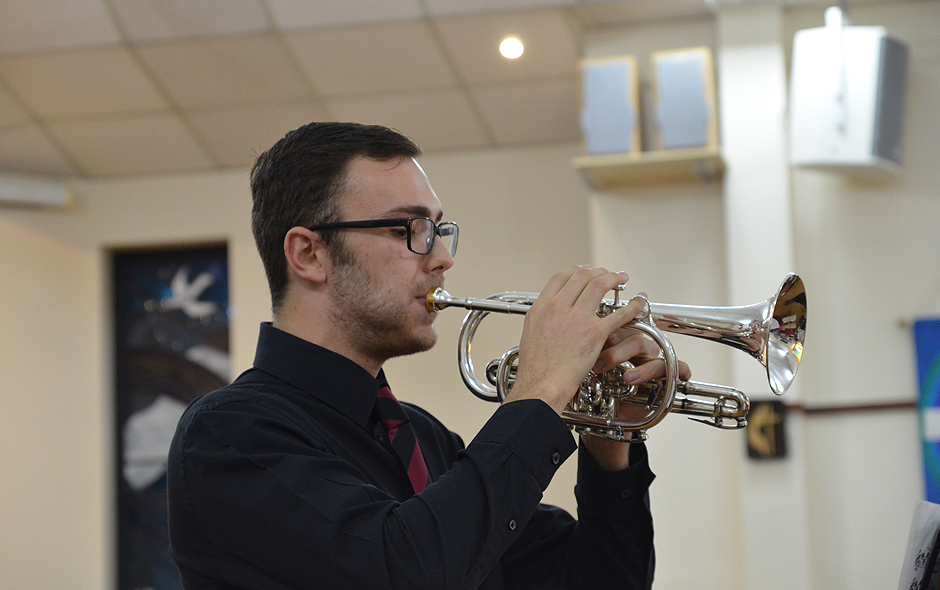 Christ Church Woodley on Saturday 9th November provided the setting for the band’s concluding ‘In Concert’ performance of 2019. The evening, in this month of remembrance, was introduced and compèred by the Reverend Andy Moffoot as a “celebration of music which will inspire, reflect and remember all those who have gone before us in both times of peace and war”.

Without further ado, the band under the baton of Matthew Ruel opened its programme on the march ‘Old Comrades’. This was followed by the band’s first soloist of the evening with Jack Porter, the band’s principal cornet player performing the iconic Brian May song ‘Save Me’ which also featured Nigel Winter on flugelhorn.

A march, a rock song to a folk song written by the singer-songwriter Archie Fisher entitled ‘The Witch of the Westmerlands’. Originally an up-beat song, the descriptive and emotive arrangement by Philip Harper featured Michael Fowkes on baritone.

In recent months tenor trombone player Mark Hawkins has been joined by Nigel Allery on bass trombone and Chris Newton on tenor trombone. One might have expected an opportune moment for a ‘good’ trombone joke, but the band had a ‘slide show’ instead for its audience with Chris, Mark and Nigel performing Alan Fernie’s composition and trombone feature ‘Attack of the Killer Trombones’.

“What lies in the future, is a mystery to us all, no one can predict the wheel of fortune as it falls”. These are the heartfelt words from the 1972 song ‘Goodbye to Love’ composed by Richard Carpenter and John Bettis.

After the songs release, The Carpenters received hate mail claiming that the group had ‘sold out’ and gone ‘hard rock’ because of the fuzz guitar solo that the song featured.

Staying with another song from the 1970’s, the band next performed ‘Bridge over Troubled Water’. This was a song that became Simon and Garfunkel’s biggest hit single and is often considered to be their signature song.

The conclusion to the first half of the concert came with Edward Gregson’s ‘Variations on Laudate Dominum’ – the closing piece of music from the band’s winning performance at the recent Oxfordshire & District Brass Band Association’s Entertainment Contest.

The band returned to open their second half with the title theme from the epic war film ‘Escape to Victory’ – you may recall that it featured an all-star cast of footballers including the great Pele and Bobby Moore, alongside veteran actors such as Sylvester Stallone and Michael Caine who were part of a group of allied prisoners of war who agreed to play a football match against a Nazi team only to win and use it as their method to escape captivity.

It is widely held that a brass band playing a hymn tune cannot be beaten. As such, it was time for the band to perform ‘How Great Thou Art’ – a hymn tune voted the nation’s favourite by the BBC’s ‘Songs of Praise’. It is based on a traditional Swedish melody and arranged as a cornet solo by Philip Harper. This saw Jack Porter return to the front of the stage to perform this familiar and much-loved hymn tune.

Staying with a Swedish theme, ‘Slipping Through My Fingers’ was played. This is a song written by Björn Ulvaeus and Benny Andersson of the Swedish pop group ABBA – a song that has become a staple in the band’s recent concert repertoire.

In this month of remembrance, the band remembered, and will continue to remember, its late Musical Director David Ruel and bass trombonist Ron Curtis; and its bandsmen who left for war, and those who paid the ultimate sacrifice.

Both band and audience stood to observe a two minute silence following the sounding of ‘Last Post’ which was set against the traditional hymn tune ‘Abide with Me’.

Keeping spirits high has played a huge part in 2019 for the Reading Spring Gardens Brass Band – something that was essential during times of war.  Ready for some toe-tapping from the audience the band performed ‘Keep Smiling Through’ which includes well-known wartime favourites such as ‘The Army, The Navy and the Air Force’, ‘Lilli Marlene, ‘The White Cliffs of Dover’ and ‘We’ll Meet Again’.

The band concluded its concert in true brass band style with the hymn tune ‘Lloyd’ arranged by Paul Lovatt-Cooper followed by The National Anthem.

The following morning the band was proud to once again provide the background music to Reading’s civic act of Remembrance at the Forbury War Memorial. Armistice Day itself also saw Matthew Ruel accompany the Mayor of Reading to play ‘Last Post and Reveille’ at the eleventh hour of the eleventh day of the eleventh month.

We will remember them. 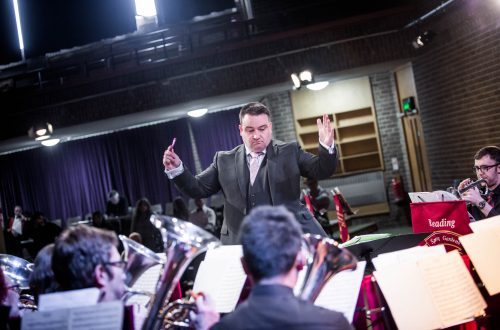 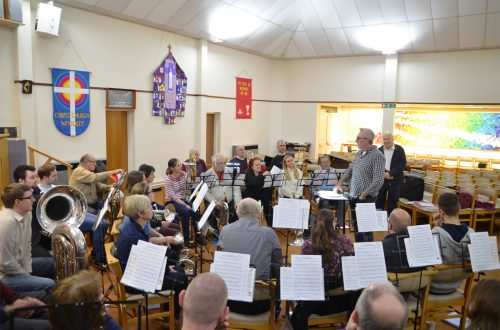 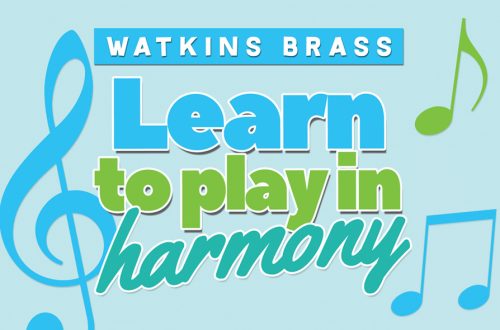