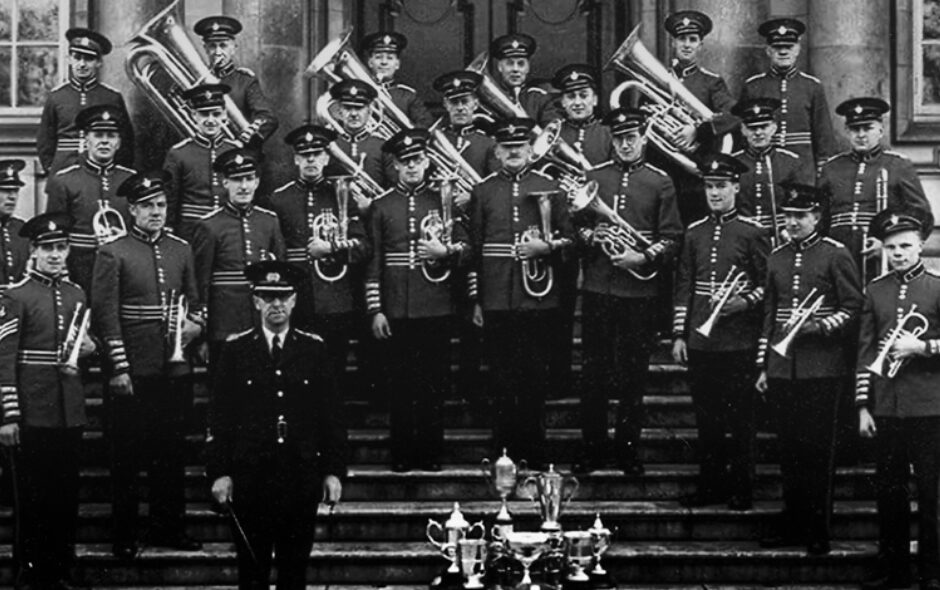 Founded in 1899, the Reading Spring Gardens Brass Band has remained a non-profit and self supporting organisation. Throughout its one hundred and twenty-three year history, the band has significantly contributed to the musical life of the town.

This would see the Spring Gardens Wesleyan Mission Concertina Band become a brass band in 1899.  Records show that the band entered ‘Redhill Contest in the second section on the 1st of June, 1903 and performed the test piece ‘The Gondoliers’ by Arthur Sullivan – the band was placed fifth in a field of six bands.

In 1934 the leaders of the chapel objected to the band selling scent cards and football tickets to raise money for the purchase of new uniforms and instruments.  As such, the band severed its connection with Methodism and the chapel (which in 1906 had moved into the new Whitley Hall Methodist Church on Whitley Street in Reading and which today is a Hindu temple).

The band looked forward and shared a history with Reading Football Club during the next seven decades by providing the musical backdrop to many of the club’s home games at their former Elm Park ground. Sadly, the band last performed for Reading Football Club and their supporters in 1998 – this was the year which saw the ‘Royals’ move to their new home in the Madejski Stadium.

Later in 1937, the band appointed its baritone player George Watkins as their musical director.  George first joined the band in c.1926.  On his appointment as musical director the band moved its rehearsals to The Cross Keys pub in Reading’s town centre.

As war broke out in 1939 many of the band’s members were called up to join the armed forces and so the band disbanded. The remaining members came together to form the Reading Home Guard Brass Band (7th Berkshire Home Guard Brass Band).  A thirty strong brass band in traditional military khaki was based at Yeomanry House on Castle Hill in Reading under commanding officer Captain Millward who saw George reinstated as the band’s musical director.

At the close of the Second World War the Reading Spring Gardens Brass Band reformed. The band’s uniform referenced the home guard band uniform which members had previously worn: scarlet tunics complete with brass buttons, black trousers with a scarlet stripe and a peak cap edged with brass. It should be noted that although the band did disband at the outbreak of war, it was only in a practical sense as administration and financial records were made and kept for the band during these war years.

The band would go on to enjoy many a contest success under George’s baton, which included qualification to the third section national final in 1958 and 1959.  With this, the band was promoted to the second section in 1960.  George embodied the Reading Spring Gardens Brass Band, but inevitably the time came to hand down the baton to his son Ted in 1976.  Ted was the band’s principal cornet player and had also been its assistant conductor for many years.

Ted continued to push the band forward in his father’s footsteps with contest appearances at Reading, Watford and Hammersmith Town Halls.  Both Ted and George were of course very proud of their son / grandson Derek who grew up learning to play in the band under their tutorship.  Derek would go on to become a British trumpet legend with an international reputation for being one of the world’s best all-round trumpet players.

For many years the band had been without a permanent rehearsal home until its move in 1998 to Berkshire Young Musicians Trust Centre in Prospect School.

Great sadness fell upon the band in 2000 when Ted passed away at the age of 80.  The Watkins family name had been synonymous with the Reading Spring Gardens Brass Band for 97 years.  Their contribution to the band and Reading was in abundance and is greatly admired by its membership to this day.

In 2008 the band would see its then principal cornet player rise to the challenge of musical director, having also played in the band under Ted Watkins for many years.  Lorraine put the band on a stable footing during her 8 years as musical director and led the band’s first brass music education initiative for primary school aged children.

In 2013 Christ Church Woodley became the rehearsal home of the Reading Spring Gardens Brass Band.  It is also where a new chapter in the band’s history began, following a period of uncertainty, with the appointment of David Ruel as their musical director.  David was a highly respected conductor and musician in the local brass band movement and was appointed by the band’s then chairperson Wayne Welch on Thursday 29th September in 2016.  The band would enjoy a renewed enthusiasm and success under his baton.

This chapter also saw a return to the band of the Watkins family name with the appointment of Wendy Watkins as its president on Monday 2nd October in 2017.

One such success that the band enjoyed under David’s baton was on Saturday 23rd February in 2019 when it entered the unregistered section of the Oxford & District Brass Band Association’s Winter Contest. For the band, this marked the end of a 35-year absence from a local association brass band contest with a first prize winning performance of ‘St. Andrew’s Variations’ by Alan Fernie.  Adjudicator Philip Littlemore also presented the ‘best instrumentalist’ award to the band’s principal euphonium player Michael Fowkes – it was a truly historic and memorable day!

With so much to build upon and look forward to, the news that David had passed away peacefully in his sleep at home, just two months later, was met with great shock and devastation.

Wendy Watkins said of him, “David took the band to new heights and stretched its horizons to greater goals and that he would be sorely missed and greatly celebrated”.  A service of thanksgiving for the life of David was held on the morning of Saturday 4th May 2019. The church was standing room only and was a true celebration of David’s life. Needless to say, the Reading Spring Gardens Brass Band played the march ‘Belmont’ under the baton of Friary Band’s conductor Chris King as David was carried into the church.

The very next day the band took to the stage under the baton of David’s son Matthew for its festival of brass concert. The concert also featured Saint Sebastian Wokingham and Tadley Concert Brass Band’s in the Michael Malnick Centre in Reading.  To close, the trio of bands joined for a massed band performance of the march ‘Belmont’ to round off a Sunday afternoon that was a fitting musical tribute to David.

This was a chapter in the history of the band that closed with great sadness, but also with great hope for the future. With a strong membership and team ethos the band continued to work hard and move forward under Matthew’s baton.

On Sunday 20th October 2019 the band entered the Oxfordshire & District Brass Band Association’s Entertainment Contest, not as an ungraded band, but as a band registered nationally in the fourth section. The band’s efforts in the rehearsal room and delivery on the contest stage saw Duncan Beckley award the band first prize for music.

Not only was this Matthew’s first appearance conducting a brass band at a contest, he led the band to a first place win in a field of twelve bands. 2019 was a very difficult year, but the band did David and itself proud in becoming the ‘2019 Oxfordshire & District Brass Band Association Winter Contest (Unregistered Section) and Entertainment Contest (Lower Sections) champions’.

As a result of this success the band was accepted into the third section of the 2020 Regional Brass Band Championships of Great Britain where the band would perform Andrew Baker’s set test piece ‘Endurance’. However, following weeks of hard work in the rehearsal room and with only one week of rehearsals left until the contest day itself, the world fell into crisis with the outbreak of coronavirus.

Determined to ‘pick up’ where the band left off in March 2020, the band ‘endured’ and returned to the band room in its rehearsal home of Christ Church Woodley for its first full brass band rehearsal following the height of the pandemic on Sunday 6th June 2021 under the baton of Matthew Ruel.

The band has since represented Reading wider afield on both the concert and competition stage. 2021 saw the band compete in the third section at Wychavon Festival of Brass and perform in concert at St. Paul’s Church in Covent Garden, London. In 2022, for the first time in 38 years, the band entered the Regional Brass Band Championships of Great Britain in the third section. Later that same year, the band in another ‘first’ competed in the Saddleworth and Oldham Whit Friday Band Contests.

Competition results aside, the last five years in particular, has seen the band enjoy many firsts and successes in the midst of difficult circumstances. The band and its members have so much to be proud of, and continue to look forward to, as it works to help keep brass band music making and the cultural heritage of Reading alive.