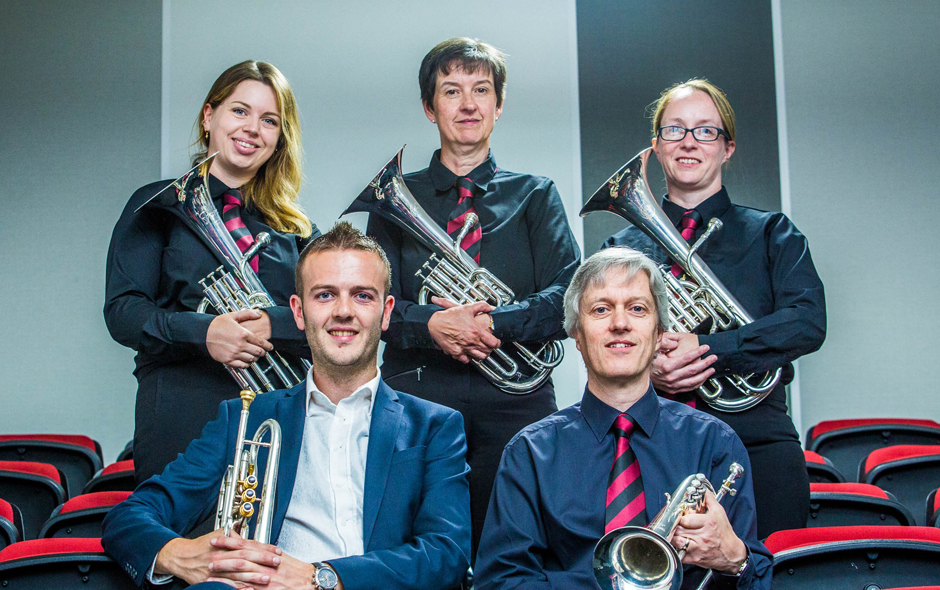 World renowned cornet soloist Tom Hutchinson performed in concert with the Reading Spring Gardens Brass Band on Sunday 14th July at The Bulmershe Auditorium in Woodley under the baton of Matthew Ruel.

The concert opened with the fanfare “Opening For An Occasion” composed by the Swiss composer Jean-Pierre Hartmann – and what a thoroughly enjoyable occasion the afternoon’s concert was.

The concert’s audience was enthralled by an exciting showcase of brass band music that not only featured the exceptional cornet talent of Tom Hutchinson but also a wide array of soloists from within the band.

A brass band concert would not be complete without a march and as such the band proceeded with a more contemporary and original composition by the Danish composer Jacob Vilhelm Larsen entitled “Call of the Brave”.

The word “paragon” describes a person regarded as a perfect example of a particular quality. Historically, the Black Dyke Band has been the epitome of quality and it has had among its ranks, some of the finest exponents of cornet playing in the world – including such names as Richard Marshall, Roger Webster, Ian Porthouse, James Shepherd and Harold Pinches.

Harold Pinches was a principal cornet player of the Black Dyke Band from 1919 to 1926 and the composer Edward Sutton dedicated his cornet solo “The Paragon” to him.  It was therefore fitting that Tom Hutchinson, a former cornet player of The Black Dyke Band should be welcomed to the stage to play “The Paragon” – his opening solo of the afternoon accompanied by the Reading Spring Gardens Brass Band.

This was followed by a change of tempo and a piece of music based on a spiritual song by the Salvation Army composer Leonard Ballantine with words by Frank Reynolds.

The words open with:

“Don’t doubt Him now; Don’t lift your heart to sorrow; Though all around seems in such disarray; God’s love is sure, sustaining through tomorrow”

Tom performed his second solo of the afternoon with Leonard Ballantine’s “Don’t Doubt Him Now”.

It was then the turn of the band to play its next piece of music entitled “Brassed Off!” which pre-dates the film to which it shares its name.

You may remember the pop song “Under the Boardwalk” written by Kenny Young and Arthur Resnick and made famous by The Drifters in 1964.

The song has since been covered by many other artists with versions by Billy Joel, Bette Midler and The Rolling Stones and more recently by The Cory Band.

The lyrics describe an encounter between a man and his beloved in a seaside town, who plan to privately meet “out of the sun” and out of sight from everyone else under a boardwalk.

Tom Hutchinson returned to the stage to perform on flugelhorn an arrangement by The Cory Band’s musical director Philip Harper of “Under the Boardwalk” which also featured Thomas Gowers on BBb tuba and bass trombone player Emil Jonasson.

The band’s first half of its concert drew to a close with “Climb Ev’ry Mountain” – a show tune from the 1959 Rodgers and Hammerstein musical “The Sound of Music”. The band’s very own “Maria” and solo tenor horn player Cheryl Heppenstall featured in this inspiring Philip Harper arrangement.

Suitably refreshed the concert opened its second half with a piece of music entitled “Intrada” – it is an arrangement by Nynke van der Heide of a melody originally written by Melchior Velpius and Michael Praetorius in the 17th century, which is also known as the traditional hymn tune “Lobt Gott den Herrn”.

Now, there will not be many people who can say that they have played a duet in concert with the principal cornet player of The Cory Band.  However, a certain young man by the name of Jack Porter is now able to! Tom Hutchinson was welcomed back to the stage to perform the cornet duet and original work “Twin Peaks” by the composer Anthony Wakefield.

A well-known hymn tune familiar to many followed with “How Great Thou Art” – a Philip Harper arrangement which has special meaning to The Cory Band and Tom in its dedication to their late friend, the legendary principal cornet player of The Cory Band, Ian Williams.

It was then time for a more upbeat number and one which is popular with the band – “Hey Jude” which was released by the Beatles in 1968 and became a number-one hit in many countries around the world and the top-selling single of 1968 in the UK, the US, Australia and Canada. It has sold approximately eight million copies and is frequently included on music critics lists of the greatest songs of all time. The writing and recording of “Hey Jude” coincided with a period of upheaval in the Beatles lives.

The ballad evolved from “Hey Jules”, a song McCartney wrote to comfort John Lennon’s son, Julian, after Lennon had left his wife for the Japanese artist Yoko Ono.

The lyrics espouse a positive outlook on a sad situation, while also encouraging “Jude” to pursue his opportunities to find love. This arrangement by Derek Broadbent featured the band’s horn section and saw flugelhorn player Nigel Winter alongside Cheryl Heppenstall, Jacqueline Ruel and Emma Scicluna on tenor horn fronting the band to play “Hey Jude”.

Another tune which is certainly a favourite with the band is “Slipping Through My Fingers” – a song written and performed by the Swedish pop group ABBA which featured on their 1981 album “The Visitors”.

More recently the song featured as part of the musical and film “Mamma Mia”, performed in the latter by Meryl Streep and Amanda Seyfried… and next by the Reading Spring Gardens Brass Band!

A timeless classic – “The Carnival of Venice” is known for its virtuosic displays of double and triple tonguing, fast tempos and octave leaps that has been a popular choice with brass soloists since its first publication in “The Arban Method Book” in approximately 1859.

Fortunately, the band had a cornet player in the auditorium capable of such feats – the band welcomed to the stage for one final last time, Tom Hutchinson who performed and amazed with Harry James’ version arranged for brass band by Mark Freeh.

Sadly, having been treated by Tom Hutchinson to a “Carnival of Brass” the band arrived at the last item in its concert programme.

Following rapturous applause from an enthusiastic and appreciative audience the band came to their feet one final time with Thomas Wyss’ arrangement of John Kander’s iconic “New York, New York”. 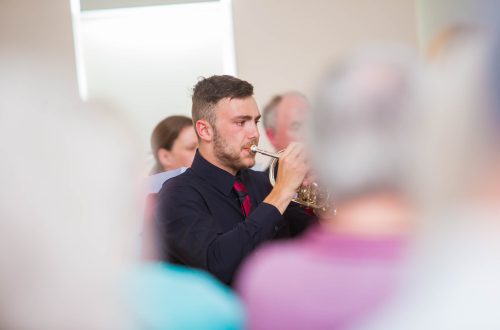 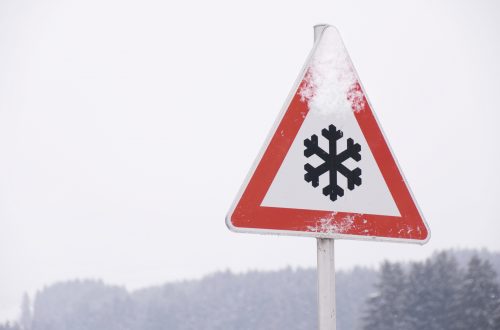 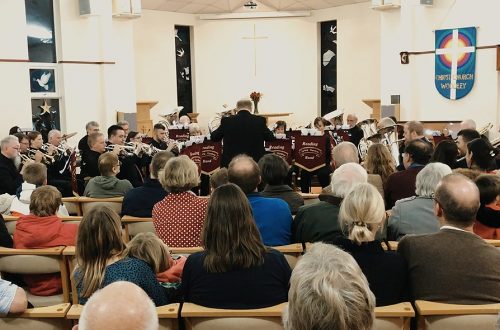