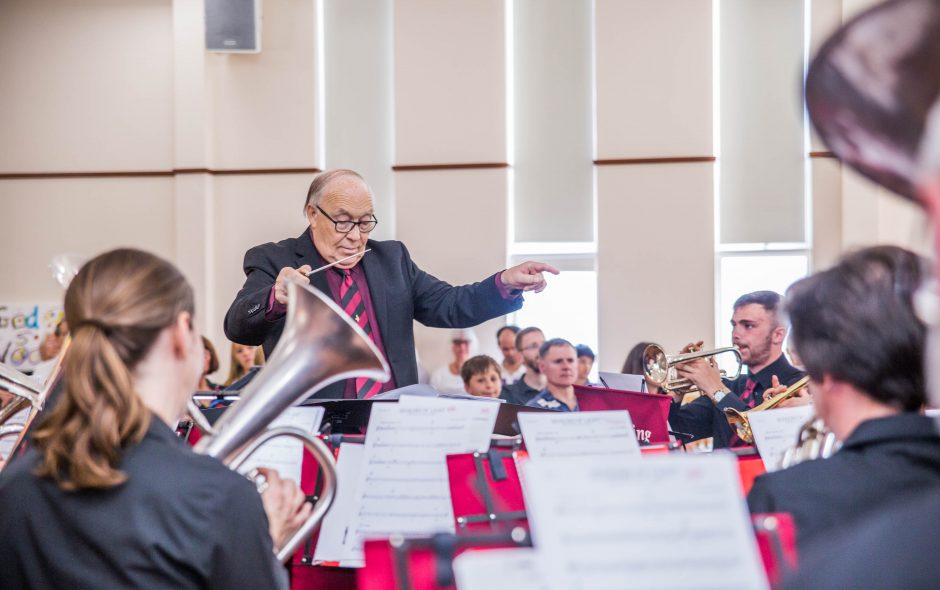 The Reading Spring Gardens Brass Band celebrates the musical life of its late musical director David Ruel who passed away peacefully on Monday 22nd April 2019 at the age of 69.

David was a much loved and respected conductor who was best known locally for his long and successful association both as conductor and compére of the then Friary (Meux) Guildford Brass Band.

He was perhaps more widely known for his support of the Tredegar Band and their conductor Ian Porthouse at a time which would see the band win the British Open Championships in 2010 and 2013. David also served alongside some of the great figures of the brass band movement as National Secretary of the National Association of Brass Band Conductors. Notably, one such figure included Roy Newsome whose march ‘Belmont’ would become a staple in the Reading Spring Gardens Brass Band repertoire under David’s baton.

David was appointed musical director of the Reading Spring Gardens Brass Band at a rehearsal on the evening of Thursday 29th September in 2016 by the band’s then chairperson Wayne Welch. This date marked a new chapter in the band’s history, a chapter that would see its members enjoy a renewed enthusiasm and success under his baton.

One such success was the historic day that the band enjoyed on Saturday 23rd February in 2019 when it entered the unregistered section of the Oxford & District Brass Band Association’s Winter Contest. For the band, this marked the end of a 35-year absence from a local association brass band contest with a first prize winning performance of ‘St. Andrew’s Variations’ by Alan Fernie.

With so much to build upon and look forward to, the news that David had passed away peacefully in his sleep at home, just two months later, was met with great shock and devastation.

With the news of David’s untimely passing, the hymn tune ‘Ellers’ was played in tribute to him by the many band’s who had been touched by his musicianship and generosity as they met in their band rooms to rehearse in the day’s that followed. Under the baton of his son Matthew the Reading Spring Gardens Brass Band played on and brought its Tuesday evening rehearsal to a close by turning to and playing “number 28 in the red hymn book” – David would not have wished it any other way.

A service of thanksgiving for the life of David was held at Holy Trinity Church in Hawley, Hampshire on the morning of Saturday 4th May in 2019. The church was standing room only and was a true celebration of David’s life. Needless to say, there was a brass band, but not just one, two! As a mark of respect the Reading Spring Gardens Brass Band performed the march ‘Belmont’ under the baton of Friary Band’s conductor Chris King as David was carried into the church.

Inside the church, the Friary Band provided the music for the service with such great care and musicianship. Their playing included a wonderful arrangement of the hymn tune ‘Ellers’ which was arranged by their BBb Bass player Nigel Simmons and which has since been published in memory of David their former bandmaster.

This chapter under David’s baton in the history of the Reading Spring Gardens Brass Band closed with great sadness, but also with great hope for the future. The band will be forever indebted to him for his leadership, musicianship, friendship and generosity.

David started his playing days on the bugle with the local Boys’ Brigade company in Yiewsley, Middlesex and was taught trumpet at school by Stan Tamplin the then brass instructor at the RAF School of Music, Uxbridge.  From playing the bugle he went on to teaching both Boys’ and Girls’ Brigades’ drum and bugle bands and to adjudicating at competitions throughout London and the South of England.

David attended Bishopshalt School in Uxbridge with Ian Carter. Ian would later become the secretary of the Southern Counties Amateur Bands Association (scaba). David was also for a time an Executive Committee member of the association with Ian. It was while at school that Ian encouraged David to join the Yiewsley and West Drayton Band on cornet where he was also a member.

David later joined the Hillingdon Borough Band under the baton of Lyn Morgan in the mid 1970s as player and bandmaster.

Following a house move to Bagshot in Surrey, David left the Hillingdon Borough Band to join the Camberley Band where he would meet his wife-to-be Jacqueline. David later returned to the Yiewsley and West Drayton Band in 1981 as their musical director.

In 1983 David went to work overseas in Singapore where he formed a brass band in conjunction with the Singapore St. John Ambulance Brigade.

The main event of the year was the Annual Parade which was a very impressive occasion in the presence of the President and Prime Minister of Singapore – the band could hardly be conducted by a ‘Private’ so David was promoted to the rank of Major overnight!

On returning to the United Kingdom in late 1985 David rejoined the Camberley Band and when the opportunity arose, moved on to Friary Guildford Band (Friary Meux as the band was then known) as player and bandmaster.

David had many happy memories of conducting the band at Ascot Races, on board the QE2, at the Inn on the Park in St. Helier, Jersey and of course at many of the then Friary Meux public houses throughout the South of England.

For several years David spent some seven months of the year travelling overseas on business and as such banding took a back seat.  However, he was still able to continue his association with the Friary Guildford Band as a guest conductor and compére, while also helping a number of other local band’s, in particular Alder Valley Brass.

Later with the winding down of his overseas travel David returned to the Camberley Band to join his children Matthew and Jessica who were learning to play cornet and tenor horn respectively in the band. As a cornet player David ended his playing days with the Friary Guildford Band in 2001 and likewise his time with the band as their bandmaster. David followed the band with interest, support and a great respect for all that the band had achieved and continued to be achieved under the baton of their musical director Chris King.

Another band that David regularly helped as a guest conductor was The Cobham Band.

He would later become their musical director in 2004 and as such led the band to a number of successes on both the concert and contest stage with performances at London’s most historic and prestigious landmarks including Westminster Abbey, Kensington Gardens and Greenwich Royal Parks.

The band’s main annual concert was held in the Yehudi Menuhin Concert Hall with guests such as Ian Porthouse, Tredegar Band’s ten-piece brass ensemble and trombonist Stephen Sykes – the then BBC Radio 2 Young Musician of the Year.

After leaving The Cobham Band in 2011 David continued to work successfully with a number of bands which included welcomed opportunities to conduct Texas Star Brass (Dallas, USA) and of course, perhaps most memorable for David, a British Open winning brass band – Tredegar!

David was a force for good. His ten-piece ensemble Blackwater Brass would see friends from Friary Guildford and Alder Valley Brass band’s (and of course later the Reading Spring Gardens Brass Band) come together through the years in support of him and many charitable causes.

David’s musical life’s journey would end following two and a half very successful years as musical director of the Reading Spring Gardens Brass Band. His wife Jacqueline, son Matthew and brother-in-law Nigel continued to play with the band in support of everyone in it and all that they had achieved together under David’s baton.

David was a truly generous, knowledgeable and talented man – the brass band movement is at a loss without him.